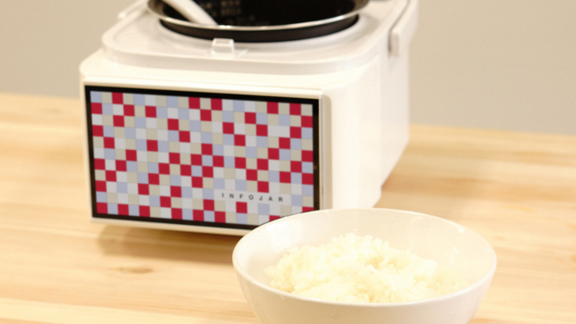 The idea for KDDI’s next-generation rice cooker INFOJAR came from a parody news report article on an imaginary product by the same name that Kyoko Shimbun, a satiritical online newspaper, published on Jan. 22, 2014.
KDDI’s research and development lab known as “au” developed the cooker as a device that goes “beyond smartphones.”

INFO JAR turned all four features of the cooker described in Kyoko Shimbun’s article into a reality.
1. Equipped with a 7″” full-HD touch screen
2. Allows you to watch YouTube videos while rice is being cooked.
3. Allows you to use your smartphone to set the timer on your cooker
4. Sends you a Twitter notification saying “”Gohan (Meal) now”” when cooking is completed

The release of the product prompted Mr. UK, owner of Kyoko Shimbun, to pay a visit to KDDI.
We provided Mr. UK with an INFOJAR so he can taste rice cooked in it.
All in all, we garnered a great deal of publicity and favorable public feedback.
We have introduced INFOJAR at such events “au WALLET Market.”
The product specification is available on Creator Sohwcase (au Firefox OS portal site) at http://showcase.kddi.com/csc/works/view/43.