TOKYO (Sept. 3, 2019) — An international team of researchers recently found that seniors’ emotional health improves when they use Qoobo, a tail-wagging robotic pillow developed by Yukai Engineering, a Tokyo-based robotic startup. The study’s preliminary results, which were released at The Robotics Society of Japan’s 37th annual conference earlier this month, showed interacting with Qoobo not only made seniors happier and more relaxed, but also prompted them to initiate conversations with others by inviting them to play with the robot.

“Among all the communication robots we have seen, Qoobo really stands out in how it draws reactions from users. Qoobo makes people want to touch it, comment on it and talk to them the moment they see it,” said Kazuko Obayashi, associate professor at Nihon Fukushi University’s Business Management Department, led the study project. “In this study, we were able to provide data science-based evidence of efficacy in the use of the robot for senior care, and that is significant,” she said.

Qoobo is a pillow-shaped robot with a lifelike tail that makes realistic movements in response to the user’s stroking and rubbing. The robot is designed to comfort people who cannot own a pet, including allergy sufferers, apartment-dwellers and seniors. The study, which Kazuko Obashi, associate professor at Nihon Fukushi University’s Business Management Department, and her team conducted to assess how Qoobo may improve seniors’ quality of life, took place between July 24 and Aug. 16, 2019 with 40 residents from two different senior care facilities in Japan participating. It came five months after a psychological assessment that Yukai conducted on a group of 38 people found they experienced statistically meaningful reductions in their stress levels when using Qoobo. 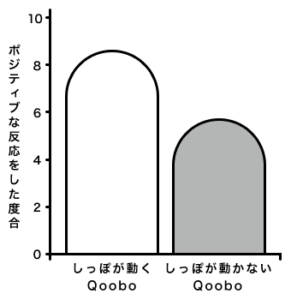 “Prof. Obayashi’s team’s preliminary findings released on Aug. 20 further confirm that Qoobo does what it’s designed to do — which is to provide comfort and healing to people in the way animals do,” Yukai Engineering CEO Shunsuke Aoki said. “Since the unveiling of Qoobo in October 2017, many individuals and senior care facilities have reached out to us to express their interest in using Qoobo for seniors for therapeutic purposes. Although responses to Qoobo vary from person to person, this research should help people better understand how the robot may be able to enrich the life of the person they care for.”

In the study, each participant took home one unit of Qoobo. The research team met with the seniors several times during the three-week period, analyzing their responses to Qoobo using a weighted five-level scoring system to assess any emotional, verbal and behavioral changes among other factors. The results showed clearly positive effects of using Qoobo in all six response categories, with the foremost significant effects observed when Qoobo was wagging than when it wasn’t in the initial assessment.

In addition, out of the 40 participants, 17 still used Qoobo after three weeks, and the level of efficacy increased over time for them. This suggested Qoobo can sustain its appeal to senior users for longer periods of time — a challenge that pet robot developers often face.

“We saw with our own eyes how Qoobo moved the seniors’ hearts, creating a chain reaction of smiles across the room,” Prof. Obayashi said. “We are also impressed that the seniors did not get tired of using Qoobo after three weeks.”

About the study
In the study, the research group pulled together the results of all criteria assessments to holistically evaluate how the use of Qoobo affected each participant. They used a benchmark called VC-IOE(J), modeled on the Video Coding Protocol-Incorporating Observed Emotion (VC-IOE), which Wendy Moyle used to assess the efficacy of the social robot, PARO, in 2017. Prof. Obayashi’s research team was comprised of six researchers from various academic and research organizations, including University College Dublin.

About Qoobo
Qoobo became one of the most talked-about gadgets on the internet following its unveiling at CEATEC Japan on Oct. 3, 2017, netting more than 10 million online video views. The Kickstarter campaign for Qoobo in late 2017 raised 247 percent of the goal amount (approx. $110,000 USD). It is now available for purchase in both the U.S. and Japan.
Qoobo features:
● Flexible tail that gently waves when caressed, playfully swings when rubbed
● Sometimes wags spontaneously to call user’s attention
● Simple communication method that helps user develop bond with robot

Story Behind Qoobo
The idea for Qoobo came from a YUKAI staff designer who wished to have something waiting for her to come home at the end of a long work day while living in a pet-free apartment. Drawing inspiration from an animal’s tail, YUKAI created a robot that communicates solely through tail movements – without relying on sounds or facial expressions – to comfort humans in just the way cats and dogs would. The company’s engineers studied the animal tail and created a mechanism that closely mimics its movements. Qoobo has been recognized for numerous awards, including the “Best 100” in Good Design Award (Japan).